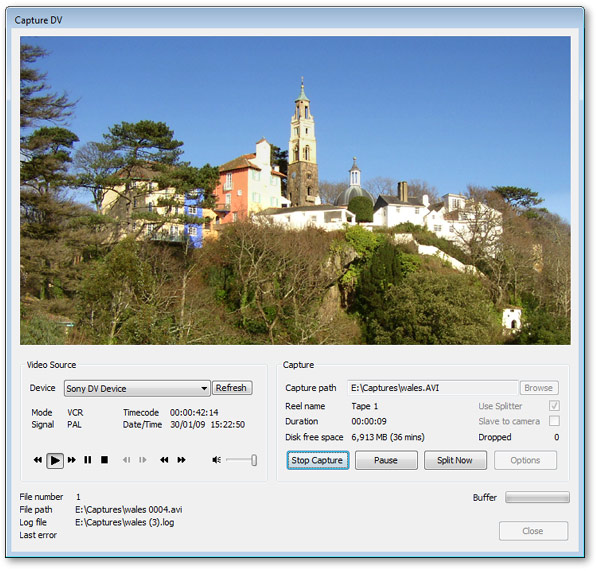 It allows you to capture standard definition DV video via a firewire cable from your NTSC or PAL DV camera (or an HDV camera which is set to operate in DV mode) to one or more AVI files on your hard drive. It can not be used to capture high definition HDV video. Although HDV cameras record to the same physical tape cassette, the recording format is very different to DV, and in all other respects they are a completely different.

You can set your DV camera to VCR mode and capture from tape.

You can also perform "live" capture from the camera by setting it to Camera mode, even with no tape loaded in the camera.

You can also set the Slave to Camera option which starts and stops capture when you use the camera's pause button.

The capture can be made to a single AVI file or split between multiple AVI files. You can set rules for when the splitting occurs, such as when sudden changes in the date and time of recording occur.

Capture will continue unhindered across timecode breaks and unrecorded areas of tape (unless you set splitter rules).

The preview pane displays the video from the camera, whether or not a capture is in progress. The first time the Capture DV window appears, the video pane area will be quite small, but you can increase its size by dragging the window border vertically. The new size and position on screen will be remembered and used each time you open the Capture DV window in future.

The Video Source section is to the left of the window. This displays the name of the DV capture device that is being used, and some tape transport buttons which you may find more convenient to use than the controls on your camera. You can see a tool-tip description of each key when you hover the cursor over it.

Some of these buttons also have a hot key associated with them.

The table below lists the keys as they appear in the Capture DV window from left to right.

To the right of the tape transport buttons is a mute button and volume control which adjusts the loudness of the audio heard from your speakers - it does not affect the captured sound level.

The Capture section is on the right of the window. This holds the controls for starting and stopping capture to the hard drive, the area on your hard drive where the capture files will be stored, the capture options, and various other information.

The Capture button starts and stops capture. The Pause button pauses and resumes capture. The Split Now button allows you to force an immediate split - the current capture file will be closed and a new one started. The Options button pops up a window containing the Capture options (these are the same as you will see in the main Tools  > Options menu). For convenience, the current setting of two of the options are also displayed on the right of the Capture section: Use Splitter and Slave To Camera - you can also change the settings here as a quicker alternative to clicking the Options button.

Other information displayed is the current Reel name, the amount of free disk space on the partition where the Capture Path is located, the current capture duration, and the number of dropped frames.

The section at the bottom of the window shows the File Path of the current (or last) capture file, and the File Number which is a count of how many times a split has occurred during capture. The pathname of the capture Log file is also shown and the text of the Last Error that occurred (if any).

The status of Capture DV's internal Buffer is also shown.

How to use the Capture DV window

You open the Capture DV window by clicking the File > Capture DV menu on the main DVMP Pro window.

When the Capture DV window appears it will scan for any active firewire DV capture devices on your PC, and add their names to the Device dropdown box. If no such devices are found then the Device box will remain empty. Remember that HDV cameras are not supported and will not appear in the Device box.

A device is only "active" if the DV camera is plugged into the firewire port and also switched on in either VCR or Camera mode; otherwise the device will not be found and it will not be added to the Device box. Also note that high definition HDV cameras will never appear in the Device box because they announce themselves to Windows as a completely different device type to DV. HDV cameras are therefore not supported, unless they are switched to DV mode where they then effectively become a standard DV device.

You can plug in and power-on your DV camera at any time and within a few seconds the device will be detected and automatically added to the Device box (except while a capture is in progress). If you unplug or power-off your camera at any time it will automatically be removed from the Device box, and if a capture was in progress it will be ended cleanly.

When you plug in and power-on your camera and it is added to the Device list, the video preview pane will display the video frames that are being sent from the camera, whether the camera is in VCR mode or Camera mode. In Camera mode the video display will be a live view of what the camera sees. In VCR mode it will show the playback from the tape, but if no tape is playing the video pane will remain unchanged.

Before you can start capturing, you must tell Capture DV where you want the capture files to be stored on your hard drive, and also the file name you would like the files to begin with. You do this by clicking the Capture Path's Browse button which pops up a Set Capture File Name box. Here you specify the folder location, the File name and a Reel name.

Obviously all of the capture files can not be given the same file name, so each file will automatically be given a unique suffix - more of which later.

The Disk Free Space indicator will then update to show the estimated amount of hard drive space available on the partition where your Capture Path is located.

The Capture options allow you to set when you want capture to stop. By default, capture will only stop when User stops capture manually by clicking the Stop Capture button. But instead you can specify Capture duration reaches in hours, minutes and seconds - when this duration is reached the capture will automatically stop, and the tape transport will stop too.

You can also set the required AVI file type of the capture files to AVI Type 1 or AVI Type 2.

Capturing can either be done to a single AVI file, or can be automatically split to multiple AVI files. The option Use Splitter to create multiple capture files allows you to specify whether you want a single capture file, or to use the Splitter to create multiple AVI files. The Splitter is actually the same tool that can be found in the Tools > Split DV AVI File menu, but here it is used "on the fly" to split the DV data coming from the camera into multiple capture files. Please note that a split will always occur if the audio properties (e.g. sampling frequency) change.

If you tick Use Splitter to create multiple capture files then you can click the Splitter page selector (on the left of the Capture Options window) and set the options for the Splitter which will dictate how and where the splits will occur. You can also set the File name format which specifies the file name suffix that each capture file will be given when it is created. Depending on which option you choose, each capture file will be suffixed with a sequential file number, the start timecode or recording date/time of the file, or the user bits value.

Here are some example file names:

You can also set a preroll delay. See the Options - Splitter page for more details of the Splitter options.

When you have set the required Capture and Splitter options, click OK to return to the Capture DV window.

You will notice that the Use Splitter and Slave to Camera options are also shown on the right of the Capture DV window. This allows you to see the current setting of these options without having to go into the Options window, and also allows you to change their settings more quickly.

You can now start capturing by clicking the Capture button. If the camera is in VCR mode, it will start to play automatically and the capture will start. If it is in Camera mode then live capture will begin.

Capture will continue until you stop it manually by clicking the Stop Capture button, or until your selected Capture stops when condition is triggered. You will also cause a capture to stop in VCR mode if you click one of the tape transport buttons which would take the camera out of play mode. Capture also stops cleanly if the disk becomes full or the camera is powered-off or unplugged.

You can also click the Split Now button which will manually force a split to occur. The current capture file is immediately closed and a new one is created.

Each time a split occurs, the File Number increments and the new capture File Path is shown.

Capture DV has a large internal memory buffer which it uses to store frames temporarily if they can not be written to the hard drive quickly enough. This may happen if your PC is fairly slow or is doing other activities at the same time as the capture is taking place. This buffer helps to avoid dropped frames. The Buffer indicator shows how much of the buffer is being used - if the indicator gets close to the end of the scale then there is a danger of dropped frames. However most modern PCs have more than enough power to capture DV data with ease, so you may rarely see the level get above zero unless you are running other intensive programs at the same time.

You can use this "live" capture feature to effectively use your PC's hard drive as a huge DV recorder, without also having to use any DV tapes in your camera.

You can also use the Slave to Camera option. In this case, when you press the pause button on your camera to start or stop recording, capture to the hard drive will simultaneously be started and stopped automatically without you having to click any PC on-screen buttons. In effect, capture to the hard drive is being controlled from the camera's own pause button. However this feature only works if you have a tape in your camera because the camera's firmware disables the pause button when no tape is present.